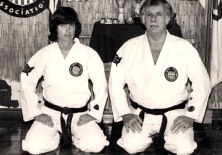 Hanshi Roberta Trias began studying Karate at a young age with her father and Sensei, O’Sensei Robert A. Trias. She is known throughout the world as Hanshi and Menkyo Kaiden of Okinawan Shuri-ryu karate. She holds the rank of 10th Dan in Karate, is a Hanshi in Okinawan Kobudo and is certified as a Chief Instructor by her father O’Sensei Robert Trias, founder and Master of Shuri-ryu and inherited the system upon O’Sensei’s death.

She holds a Ph.D in Education. Trias Hanshi is currently working on a trilogy of books which focus on O’Sensei Robert A. Trias and his lifetime of Karate called, The Beginning of the End, Karatedo: The Way of the Modern Warrior.